So, the 5 best lavalier microphones are:

So what is the overall best lavalier microphone? Well, my top pick would be the Movo WMIC50 lavalier microphone system. It’s a great, budget-friendly, wireless microphone with a range of up to 164 feet. The quality of the audio recording is crystal clear and it does a great job of eliminating background noise.

However, there are plenty of other lavalier microphones worth considering too. The best choice for you will depend on how you plan on using it and the features you’re looking for. In this article, I’ll be taking you through the best 5 products on the market right now. I’ll also be providing you with a detailed buying guide to help give you some direction.

In case you’re unfamiliar with lavalier microphones, I wanted to cover the basics before we get into the list itself. That way, you’ll be able to make a more well-informed buying decision. Let’s start by clarifying exactly what they are.

What are Lavalier Microphones?

The main difference between lavalier microphones and other types of microphones is that they’re designed for hands-free operation. You don’t have to hold a lavalier mic, you can simply attach it to your clothing, collar, belt, or elsewhere on your person.

There are a few different types of lavalier microphones, and we can broadly subcategorize them based on:

Wireless systems are more expensive but allow you to be more flexible with your recording distances.

Different recording sources (like portable audio recorders, smartphones, or cameras) have different input/output systems. You’ll want to make sure that the lavalier microphone you choose will be able to plug into your recording device before you buy it.

Advantages and Disadvantages of Lavalier Microphones

The main benefits of lavalier microphones are:

On the other hand, there are also a few drawbacks, such as:

When to Use Lavalier Microphones

Ok, now we’ve covered the basics, let’s dive into the list of the 5 best lavalier microphones! 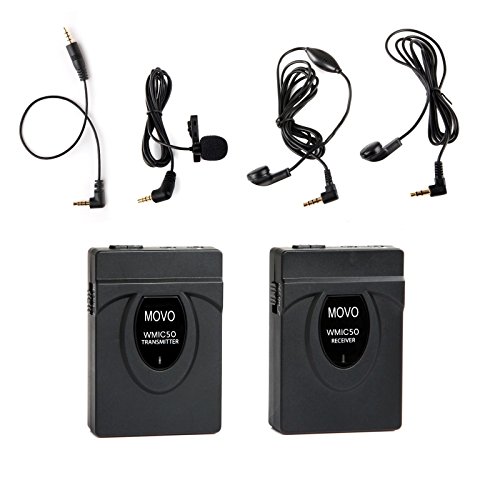 My number one spot has to go to the Movo WMIC50 2.4GHz wireless lavalier microphone system. It’s wireless, so it comes with a radio transmitter that transmits the audio signal to your recording device, and a receiver that hooks up to your camcorder.

All you have to do is attach the transmitter to your subject (you can hang it on their belt, for example) and then you’re able to freely record audio from a distance. The maximum range is 164-feet, which should be plenty! You can also mount the receiver on your camcorder or tripod using the included mount.

The whole set comes with everything you need: the transmitter, belt clip, tripod mount, lavalier microphone, windscreen, and 2 headphone jacks.

Considering how affordable it is, the audio quality is awesome. It captures your subject’s voice really clearly with almost negligible background noise. It’s also battery operated and 2 AAA’s should bag you at least 3.5 hours of battery life, which is pretty good! 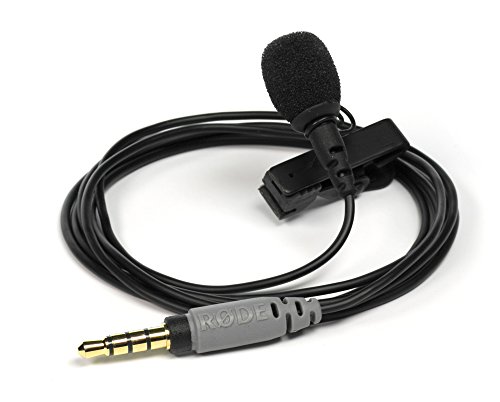 My runner-up spot goes to the Rode Smartlav+ microphone. This is one of the most popular and mainstream lavalier microphones on the market.

The great thing about this microphone is that it’s been designed to work with Apple products like iPhones and iPads thanks to the in-built iOS application, the Rode Rec. If you want to use your iPhone as a recording device, this lavalier microphone is the way to go. You just connect the TRRS jack to your phone through the headphone jack and you can record audistraight to your phone.

It has a high-quality omnidirectional condenser capsule and allows you to record professional-grade, high-quality audio. It’s also super durable.  Thanks to the Kevlar reinforced cable, you won’t need to worry about any wires snapping either. 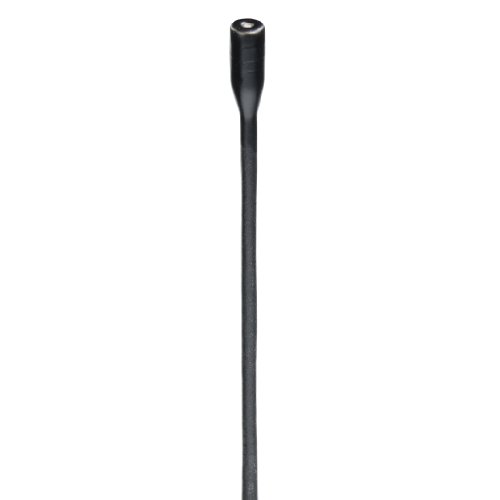 This B6 omnidirectional lavalier microphone from Countryman represents the high-end of the scale. It’s very much a top-of-the-line mic that’s been built for professional use. Unfortunately, it also has a top-of-the-line price tag and is much more expensive than most of the other lavalier mics on this list.

Still, if you’re an industry professional, it’s worth every penny. The performance is great. The mic delivers very low distortion even at high sound-pressure and always has great feedback.

But that’s not all. Aside from the superior audio quality, this mic comes with a lot of other benefits too. The biggest benefit is the discrete design. The manufacturers have built this thing to be hidden. It’s small enough to fit in your hair without anybody noticing as it’s literally almost as thin as a hairpin.

Most of the mics we’ve talked about so far are best suited for journalists and filmmakers. This lavalier microphone from Audio-Technica, on the other hand, is designed specifically for musicians.

It uses a high-end system that’s ideal for recording vocals and acoustic performances. The cardioid polar pattern (that means it records sound directly from the point in front of the microphone) makes sure you get a pure, isolated recording of your musical performances by minimizing sound pickup from the rear and sides. 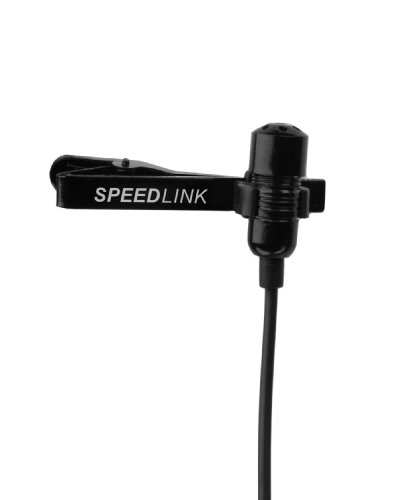 The Speedlink Spes clip-on microphone isn’t the fanciest lavalier out there, nor does it have particularly amazing recording quality. However, it does do a reasonable job and costs less than $10, which makes it the best budget lavalier microphone out there.

In case all of the lavalier microphones we’ve talked about so far are out of your price range, I wanted to include a budget option too. As such, this lavalier had to make the list.

It offers surprisingly good noise suppression considering the price and really holds its own against much more expensive mid-range mics.

How to Attach a Lavalier Microphone

Hopefully, you’ll have found a lavalier mic that works for you from the list above. Now let’s move on and talk about how to use it.

The best way to attach the lavalier mic to the subject depends on how you plan on using it. Let’s look at some different methods.

Hide it in your hair

If you plan on using it to record or amplify theatre performances, it’s usually best to conceal it in the subject’s hair. This way, it’s less likely to scratch against the performers clothing. You don’t want the mic to pick up any horrible scratching or rubbing sounds!

It’s also better to conceal it in their hair in these kinds of performances as it’s more discrete. Seeing 21st-century tech popping out of the shirt of the actor in a play that’s set in the 19th century really breaks the whole facade!

Wear it on your head

The advantage of attaching your lavalier this way is that it’s less likely to get knocked around when you’re moving around quickly.

Clip it to your collar or tie

This is the most common way to attach a lavalier mic. It’s a method that is almost always used in TV and journalistic interviews. You simply use the clip to attach the lavalier microphone to the subject’s clothing. It works best on things like jackets, collars, and ties as these are closest to the mouth.

The advantage of this method is that the microphone isn’t covered up by any fabric and is near the subject’s mouth so the recording comes out crystal clear. The disadvantage is that it’s visible!

Hide it under your clothing

In filmmaking, lavaliers are usually hidden under the subject’s clothing instead. This conceals the fact that they’re mic’d so as to not break the fourth wall.

However, being concealed under clothing can cause the mic to pick up the sound of fabric rustling, which is why it’s not suitable for all applications. Most of the time, boom mics are used instead.

Other Types of Microphones

Shotgun mics are so-named on account of their shape. They’re usually long microphones that jut out from the base, like the barrel of a shotgun. The reason they’re shaped like this is to create the right pickup pattern.

Shotgun mics pick up sound from directly in front of them. This is useful as it allows you to be more precise about what you record and avoid picking up any ambient noise from the sides and rear. In other words, they isolate the sound you’re trying to record.

Some shotgun mics are attached to cameras, others are handheld, and others still are mounted on long poles. The latter of these are often referred to as boom mics and are a staple piece of equipment in movie studios. They’re used to record what’s happening on set and are operated by stagehands offset.

You’ve probably seen handheld mics before. They’re very iconic and what most people visualize when they hear the word mic. That’s probably because we see them on TV almost every day.

They’re the mics that you see musicians use on stage at concerts, hosts use at awards ceremonies, and reporters use when they’re conducting a live interview. They’re also often referred to as stick mics.

The reason these mics are so useful is that they’re versatile. They’re designed to be used in a whole host of different environments and applications. They’re also very durable.

The downside of handheld mics is simply that they’re so visible. You can’t exactly hide a handheld mic that you’re holding up to your subject’s mouth. Because they’re so iconic, they can also look a little ‘gimmicky’.

A third option is to go for a built-in mic. Most cameras come with their own built-in microphones, but these are, for the most part, extremely poor quality.

You just can’t get the same level of audio quality from a built-in camera mic. Why? Well, it’s not actually the mic’s fault. It’s simply because when you’re using a camera to record your subject, the mic won’t be close enough to them to pick up their audio clearly. If you put your mouth to the receiver on your camera, it will actually probably be a whole lot clearer. Try it!

There are other types of built-in mics that provide a solution to this problem. These are called ‘portable audio recorders’. They have a mic built into the top so you just have to click a button and hold it near your subject’s mouth, kind of like a handheld mic. You can also mount it on your camera, but this won’t solve the distance problem.

The advantage of these portable audio recorders is that you don’t have to worry about transferring the audio from your microphone to your recorder. There’s no need for any mic jacks or anything like that, it’s an all-in-one tool.

Have you tried any of these lavalier microphones? And did you like them? Let us know your thoughts in the comments!