Dude Perfect are a huge sports/entertainment YouTube channel with over 50 million subscribers, known best for their trick shots and hilarious ‘Stereotypes’ videos. The production quality of their videos is always really high, so I did some research to try to find out what camera they use in their videos.

So, what camera does dude perfect use? Nobody knows for sure what camera Dude Perfect use as they’ve never publicly told us. However, it’s likely that they use the Sony FS-700. This is based on a brief glimpse of their camera in a still taken from one of their videos. However, it’s also likely that they use a variety of different cameras depending on the type of shot.

In the rest of this article, we’ll talk about some of the other cameras that Dude Perfect probably uses to create their videos and why they might choose to use them. We’ll also look at some benefits of the Sony FS-700. Let’s jump into it!

As regular watchers will know, Dude Perfect videos can be pretty intense. They create fast-paced, action-oriented, sports-style videos on everything from RC Airplane battles to Winter Olympics challenges.

These kinds of videos often require creative camera angles and a very specific filming style. When you’re trying to get a POV shot from rockets as they’re flying through the air, you can’t just point a DSLR at it.

For this reason, Dude Perfect almost certainly use different cameras for different purposes. Here are some of the different types of cameras they’ll likely use and when they’ll use them.

Dude Perfect videos often feature aerial shots, either as establishing shots for B-roll in the video or just when trying to shoot something that requires an aerial camera to reach.

You can see a great example of drones being used in Dude Perfect’s Nerf Blasters Floating Island Battle video. The video immediately opens up with an establishing shot that could have only been filmed using a drone.

As the whole video takes place on an obstacle course over water, it would have been near impossible to have a camera crew using regular cameras mounted on tripods to record it. Instead, they had to rely on drones which could hover over the water to film. They also probably used waterproof cameras or action cams to get a few POV and other shots.

A lot of Dude Perfect videos require a sports-style coverage, and for that, they probably use action cameras. Action cameras are small, compact, highly-durable cameras that can film in harsh conditions. They’re great for POV shots as they can easily be mounted on the wearer’s chest, wrist, head, or anywhere else.

An added advantage of action cams is that they’re usually waterproof or able to be held in a waterproof housing, which makes them ideal for shots where they might be exposed to water or snow. There are a couple of examples of action cams being used for POV shots in this skiing video from Dude Perfect when the guys plow into the snow.

The most popular brand of action cameras on the market is GoPro. If I had to place money on the action camera that Dude Perfect use, I’d probably bet it would be the GoPro Hero8 Black.

Occasionally, it looks like Dude Perfect uses custom-built camera equipment for very specific shots. For example, in their RC Airplane Battle video, they use a camera that’s built into the airplane itself to record POV shots as it flies through the air.

It’s possible that this is just an action cam mounted inside the housing of the airplane, but it’s more likely that the airplane manufacturer built the camera into the airplane during the manufacturing process. These types of built-in cameras may be used from time to time in Dude Perfect videos.

And of course, they also use regular 4K cameras for the vast majority of their video shots. These are the cameras that are used whenever they’re recording themselves speaking or doing stuff, which makes up the bulk of their videos.

We know they only use 4K cameras as all of their recent YouTube videos are uploaded in 4K resolution. We’re also pretty sure that the main camera they use to record these shots is the Sony FS-700.

As their 4K Sony FS-700 cameras are the most important piece of equipment that goes into shooting Dude Perfect videos, let’s take a closer look at what it has to offer. 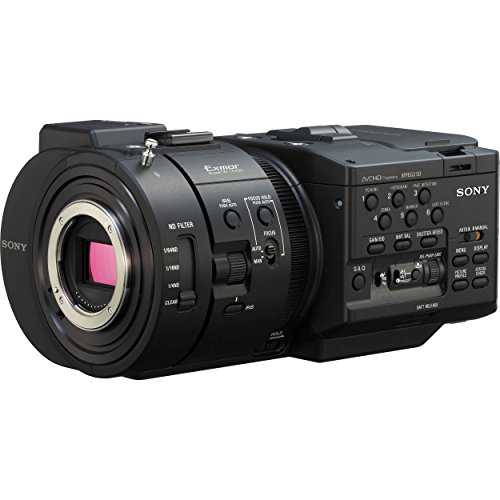 It’s clear to see why Dude Perfect would use the Sony NEX FS-700 – it really is a great camera. When it was first released, it was probably the best high-end professional camera on the market in terms of value for money. Here are some of its many benefits.

Undoubtedly the biggest benefit of the Sony FS-700 is its high frame rate. It can shoot at a whopping 960 fps in a reduced resolution, or up to 240fps in full HD resolutions.

Why does that matter? Well, it enables the camera to shoot in super slow-mo. You see, the more frames you record per second, the more you can slow down the footage while still keeping it smooth and avoiding frame skipping.

A 24fps is good enough for fairly smooth footage in full-speed videos. As such, 240fps allows you to theoretically slow it down x10 the normal speed. At 960fps, you can theoretically reach a whopping x40 slow-motion.

This is especially important for Dude Perfect as they use slow-motion shots very, very frequently in their videos. In fact, it was probably the main reason they chose to shoot with the Sony FS-700.

The FS-700 uses Sony’s E-mount Interchangeable Lens System, which makes it very adaptable. The lens system is compatible with a vast array of lenses, including Canon EF, Sony Alpha, and Sony’s own range of low-cost servo zooms.

A final benefit worth mentioning is how ergonomic the FS700 is. By that I mean, it’s really easy on your wrists and can be operated for long periods of time, which I’m sure Dude Perfect’s crew appreciate. It’s small and lightweight with a clever ergonomic design.

How Much Does Dude Perfect’s Camera Cost?

If you’re an amateur YouTube video producer, that might be a little out of your budget. That’s understandable, but don’t worry – there are plenty of other great cameras out there that might better suit your budget range.

For example, you might want to check out the Nikon D3500, which is a great affordable DSLR. Alternatively, if you’re looking for a more affordable camcorder, try the Canon VIXIA HF R800.

There you have it. Now, you should have a better idea of the different kinds of cameras that Dude Perfect use, when they use them, and why they use them. Hopefully, this will help you to make your own sports-entertainment videos.